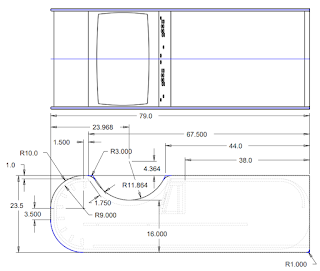 This cabinet does not fit with my normal methods. Sheet goods, not much joinery, mostly painted and quick construction. (Insert self deprecating joke here.) Still, there were some things I was worried about, and worked out prior to construction, so I started with a (gasp) drawing. I share this information here not because this is the direction I intend to take this blog (so regular readers might skip this long post), but just in case anyone in the arcade cabinet community later finds something they'd like to borrow, I'd like to provide that resource and encouragement for them to do so. 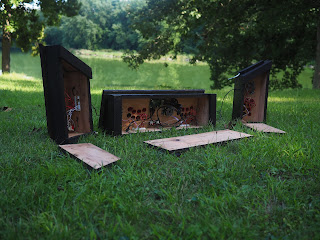 We started with the center control box because that was the part the boy needed completed for his assignment (Phase 1). The most fun part; don't do this part first or else everything will have to be made to fit around this, making the cabinet much more challenging to dial in perfectly, rather than just fitting the control box ±1/16" to fit the cabinet.... Or perhaps you should do this part first and stop there, because you have everything you really need to start having fun and the rest is a lot of work for what amounts to a fancy stand for this box. 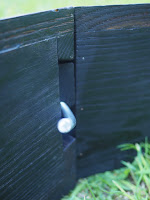 The concept for these boxes revolves around modified traditional Japanese carpenter boxes, which are pretty genius in their design & construction. Simple, bomb proof, clever and require no hardware, yet provides access to controls if you need to get at them later. By angling the top, I made it a bit more complicated, as did the angled end surface for P3/P4. There was some order of operations and head scratching to make sure I got surfaces flush and the angles all correct (thanks high school geometry!, also block plane) This was especially the case with the tapered dovetail connection to lock the boxes together, but that's mostly a game of what shape goes where (see pictures) rather than any ubercomplicated joinery. 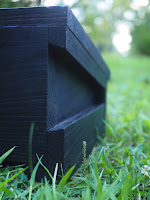 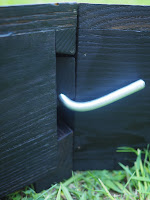 I glue the long grain joints where I can for strength, and since we charred the surface as the finish, we carefully finished all visible surfaces prior to glue/assembly. Simple finish pin nails (screws on the lid batons) and it comes together easily and sturdily.

(Tip: the hole for the locking pin gets drilled at the very very end) 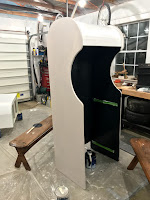 Most arcade cabinets are made with MDF, which is a fine enough material for it's purpose, and especially given the vinyl/paint finish applied is a good fit. Despite MDF's lower cost; it's also heavier, and has a tendency to not wear as well long term when moving, plus I prefer working with plywood, so that's what I went with instead. I did as best as I could with sizing components (e.g. sides are <1/2 sheet width); I still ended up needing 3 sheets to get all the major components. (Exact quantities are not 100% clear since I have lots of pre-existing scraps in my bins that we utilized where we could.) We used 3/4" "Classic Birch", which is marginally better than paint grade BCX plywood (additional ply's and a slightly smoother surface), but it's not great plywood. (Tho' this aint fine furniture either.) In retrospect, I think I would have preferred to use 1/2" at least for the middle panels to cut some weight.
Most MDF cabinets also call for T-molding to cushion/round the edges and give a more finished edge. I chose not to, to save some expense (mostly from needing a specialized router bit to go around curved edges) this meant a simple round over, filling and sanding. T-molding would probably be nicer, but I'm not unhappy with the results and an acceptable way to cut costs if using plywood. 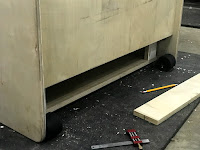 I'm sure there are several ways to put this together, we used glue & pocket screws spaced fairly close together. Then fill all the pocket holes with shop made plugs The most challenging bits are aligning the parts during assembly. Draw a line to show the reveal, then use clamps provide a stop so the piece doesn't shift while driving the screws. It's plenty solid especially once the "drawer" is added. 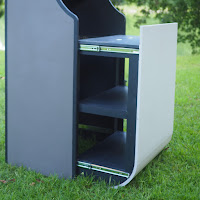 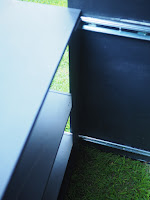 Possibly this is the part you should start with, then the carcass, then the control panel to reduce the impact any errors might have. I did it last... It's a pretty straightforward (and hidden) pocket screwed frame with plywood shelves mounted on drawer slides. I originally intended to have stops & latches attached; but in practice it moves with just enough friction, but not too freely... lethargy wins again. 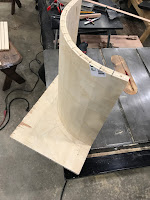 If there was one thing I'm not sure of, it was using regular plywood and kerfing/bending  it to follow the line. It worked, but did create facets and personal stress during the process. The boy likes the facets, so I guess I like that about it, though a smooth curve from bending plywood or veneer over ribs seems like a better choice to me (I couldn't get bendy ply in a timely manner, so that drove the decision)

What I did learn about this process is: 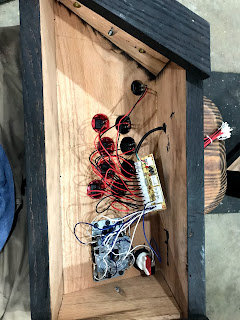 There are many resources for electronics setup with the retropie setup, so I won't go into great detail. I will just highlight a couple of things I didn't know about.

I stressed about snap-in vs. screw buttons. A clean hole from a correctly sized carbide forstner bit (highly recomended) and the widely available snap-in will be just fine in 3/4 wood. Normal use pushes them tight into the hole so they won't pop out, and since this isn't a public arcade, I'm not worried about vandals prying them up from the top surface. It's literally fine.

I was worried that given the increased depth of the wood top panel, the joystick would need extensions. I tried them, it's better without. They aren't required at 3/4" thickness. 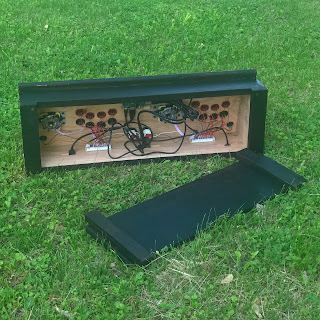 Inside the main box, I found it useful to snake a few extension cords for USB/HDMI/power through the exterior. This makes final connections easy. I recessed the ports and hot glued them in. It's a nice feature and makes the central unit feel much more polished than other possible solutions.

I was originally going to wire this cabinet up with the traditional socket and switch, but found a simple power strip (with longish cord) on the top shelf is hidden and fine. The cabinet construction lets you snake the power cord out easily. Then TV, Raspberry pie etc. plugs into that.
When wiring up the USB controllers, get them wired to the controls FIRST, then mount it to the box based on wire slack available. Speaking of mounting the control PCB's ...Hot melt glue is fine, like we did on the first two... but use the low temp little guns, not the upgraded hi temp gun I bought mid project and fried P3 & P4 the first time and need replacements. 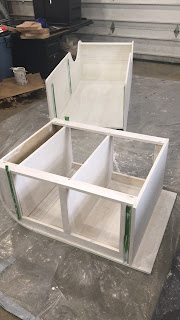 It's painted. I dislike painting, but you probably already have an opinion on that. Trim everything, fill everything, lightly sand everything, prime (always Zinsser BIN), paint it how you want.


A few things changed from the rough drawings outlined here, hopefully they will be obvious as you see in the construction photos or read above. but these are here for reference for those that benefit from numbers.

Most notable change is, there was originally a bezel that was to give some structure and mount the TV Panel to. In the end, I found the construction to be solid and it wasn't needed, so I simplified the TV mount to an articulated VESA arm, which allows re-positioning when converting 2p to 4p. The back and top are all one piece not two as shown in the drawing.  Also, originally I had ribs to support the curved top. These aren't needed given the way I constructed it., Had I used a thinner more flexible part, maybe it would.

This was a great project. We've had many good moments at this machine. It was great to work with my son on a project that we both can enjoy both from the time spent working together on it, as well as the time spent together at the controls. I hope there are many more beyond this one. 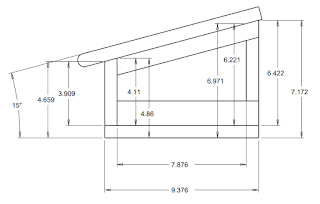 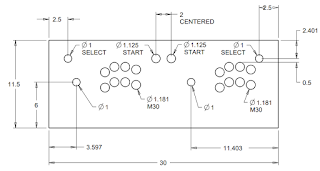 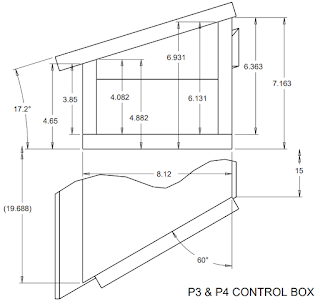 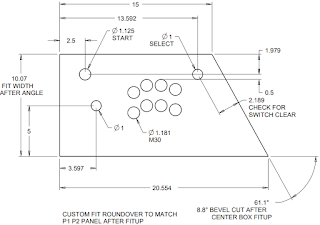 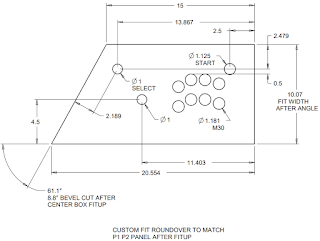