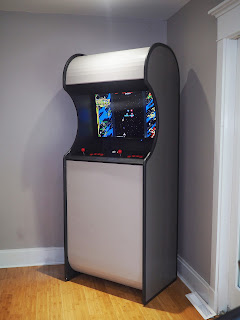 When the boy expressed an interest in building an arcade cabinet (See exciting backstory in part 1), I was largely disinterested, because they seemed to be large and uninteresting boxes at first glance. And not to try to offend anyone, but often they are garish and clash with almost everything decor wise outside of the over stimulated atmosphere of a dimly lit arcade of days gone by. As a single father of two teens, I'm pretty sure Architectural Digest isn't swinging by for a photo shoot anytime soon, but still many arcade cabinets are just plain ugly, clunky and absolutely HUGE. Still, I wanted to support his interest and so I began delving into numerous designs so I could help guide his choices into something I'd be OK with being in my house, and would be fun to play together.

One design decision that needed sorted was form factor. There are 3 main types: Free standing cabinet, table top, and Arcade-in-a-box.

Arcade in a box (with HDMI out to TV) seemed like an interesting idea plus would be portable if wanting to take it to friends houses, playing on the projector etc. But unfortunately I think this would miss out on some of the best things about arcade style controls, i.e.  the jostling that ensues from competitive proximity in 2P games and being able to lean into the joystick and buttons with a bit of solidity. The later also ruled out the table top style for me, (That and the fact that it would still need stored someplace largish or take up table/counter space.) This steered us to a free standing cabinet. Traditional freestanding cabinets are very deep some ~40" deep.

One other major design choice is whether you are going for authentic with tube monitors bezels etc or not. That will drive excessive depth and extra electronics, and that we were going for a vibe rather than authenticity, we decided we would veer from traditional shapes. We were both rather impressed by the shape of this one, and used it liberally for inspiration. I was mostly impressed with the round top as it sort of lent a modern, minimal take to the side profile to my eyes, but there are many many options for shapes to consider to get a shape that looks right to you. In the end utilizing a modern flat panel allowed for the unit to be significantly less deep (24") and could be smaller still if desired, though at some point it gets tippy, which is why we chose a more square corner at the bottom.
(Honorable mention goes to an idea to incorporate a TARDIS MAME cabinet, something else we both wanted to make, but in the end it fell away) 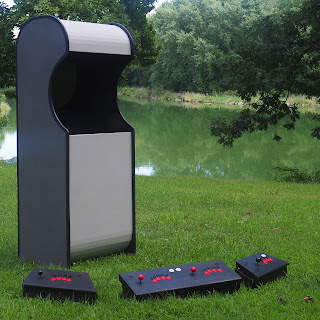 Another major design step is determining control layout. In an arcade, there are many setups and controls optimized for each specific game. With a MAME cabinet, trying to incorporate all of them (knobs, balls, joysticks, buttons ...) often leads to the strange, cool and weird. One major decision point is the number of players. We eliminated single player from the choices since so many of our favorite games involve cooperative/competitive play. There are many interesting 4 player games, but allowing space for the panel starts to make for a very large unit. At some point we asked "what if it could convert from 2p to 4p mode?" and this is when inspiration struck, and where we had a chance to innovate in our design. 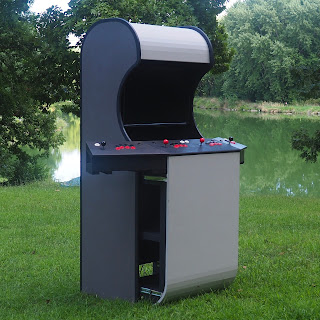 There are some others out there with modular controls in their cabinet (It's very cool to explore what other creative people come up with) but as far as I know no others that transform in quite the same way as ours, with a removable arcade in a box style that has attachable "wings" for P3 & P4. This also necessitated a pull-out "drawer" to allow the cabinet to convert so the wings can attach. This project began taking on a life of it's own beyond what the boy could complete for the project, but it was also pulling in my interest for doing interesting things. 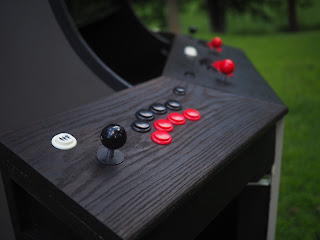 Arcade memories are interesting. I found I had distinct memories of how things were, even though after researching you find out you are mixing memories. I love the uber-clicky Happ buttons, but also the convex button shape (false memory) I also like the ball type Sanwa joysticks over baton Happ joysticks (you might have your opinion, this is mine) in the end I got some super clicky buttons for "Start" buttons to scratch that itch, but went with the Sanwa type buttons/joystick elsewhere (they still have a nice enough "click") it pays to do some reading about the mechanical differences

Button layout is another highly personal choice. There are some great resources to consider. We decided to go full 8 button layout but no roller balls or other odd bits, just because we didn't think we'd need them often enough to justify (though centipede would be fun.) This is what I decided, with some minor tweaks to make P3 & P4 to make things work either visually or mechanically. This pattern fans out nicely under my fingers and doesn't cause weird reach issues.


Many cabinets are very flashy and colorful, which is at home in an arcade but not in many homes and comes off as an eyesore to many. We liked the monochrome effect in the referenced design as well as the character representation used. To be honest, we have another phase "planned" that would involve a similar custom combination of heroes (and villains on the opposing side) but given how happy we are with it as-is it is unlikely this design and painting will ever come to fruition. 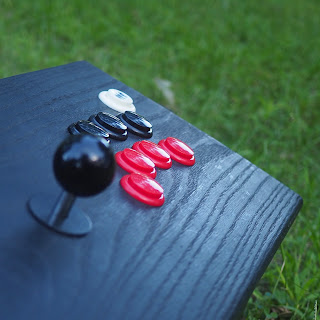 The control panel is another thing that takes a lot of abuse and I've seen vinyl coated MDF versions worn quickly or metal or plastic versions, but I'm a creature of habit when it comes to materials (preferring wood), so I guess it's not really surprising that I ended up with a Shousugiban (technically Yakisugi) oak panel. I love the tactility it adds to projects which makes it perfect for this area of the machine. I think it also classes it up a bit. For similar reasons, we also chose low key black buttons (without any lights) for one row of buttons, to avoid the "too many buttons" look. 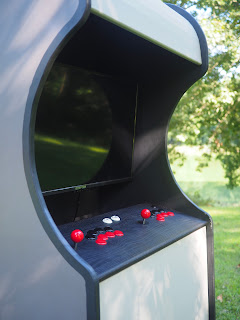 In the end we came to this design, it's worked out extremely well. I think if I was starting over, I might consider a wall cabinet version hung on a french cleat) just to further reduce the footprint, but it's good. Also, theory vs. reality lesson learned, I could have probably used fewer buttons on P3, P4 since 4p games never support that many buttons, but #symmetry... One other design feature that I had in my design but never executed (but may eventually get around to retrofitting) is 2 skateboard wheels in the back corners to allow it to tilt & roll since it's kind of hard to move.