So after the last string of posts I owe it to share my personal design plan. I was actually going to make a CAD model to illustrate and talk through it but my CAD laptop lost it's mind last weekend and shot that plan. So instead I am sharing my most recent doodle from during some corporate rah blah blah meeting. I hope you can make out the idea and obviously it's rough. I intend to shape beyond the basic structure but would rather let that bit be organic and in-the-moment. Also, while I discussed important design criteria before, I failed to mention time as a factor, and this project definitely has that, which colored my choice of joinery etc. (see other excuses & disclaimers below) 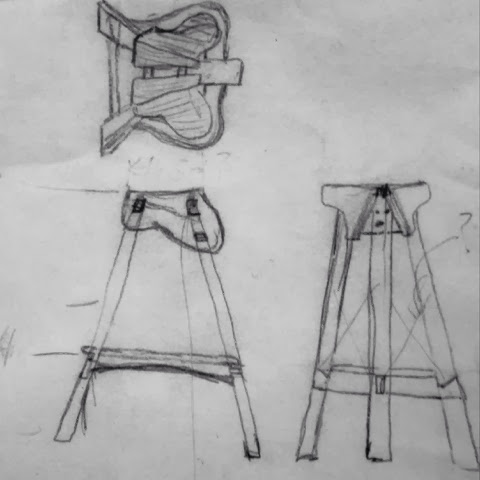 Walnut. I have from a few random freebie scores over the years. It is not great stuff, but since most of my parts are small and I have more than enough to pick through.  I love walnut, but usually find it too dark for our house. I'm not buying any new stock for this, so it's whatever I can scrounge. There is a chunk of Bois D'ark I'd like to use a bit of as an accent but it might not be worth the time to man-handle it. Hopefully this weekend I get some stock prepped.

I'm going to have a single post here and just post random photos throughout the day on the same post so you'll have to refresh if you are following along at home. Then I'll tidy up a week or so later.

I chickened out, and went with a tripod. I didn't devote the time to come up with a flex-body structure for 4-5 legs since this would inevitably have ever increased joinery. (But it made me miss out on the requisite FEA heat maps, which would have been very cool). I have flared the rear legs out & back a bit (not equilateral triangle) which will lessen me tipping backwards. Falling forward and at an angle is a lesser risk as my feet will have defined positions.

Definitely directional and wood, (though I liked the idea of 1" nylon webbing or string as a seat too.) In the end, I wanted to try out a saddle chair to see if they are ergonomic. I like the idea of the divided saddle for airflow and it seems like a nice handle and maybe even a tool slot for some tasks if not too wide. I mocked up a seat a few weeks ago and think it's going to work out. I had originally tilted it forward, but in reality, a flat top was more comfy plus surely a flat datum surface wouldn't hurt... 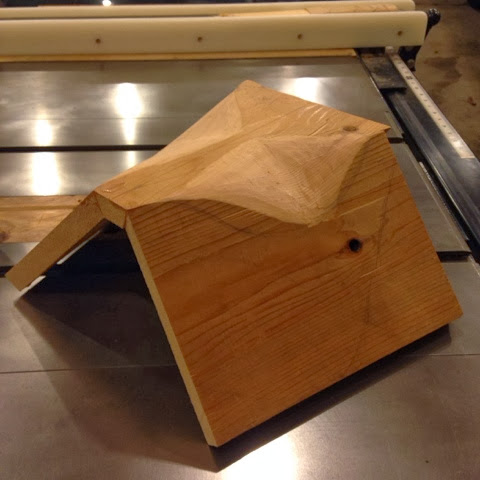 The over-thinker in me struggles with this item;.I'm not afraid of screws, but I also love joinery. I've tried to design this piece to feature quick to create mechanical joints. Look at the sketch for dovetail laps, bridles, draw boring and fake mortises (where a joint is made without chopping). I'm sure this is ambitious for my speed. Weird angles abound so there will be some head scratching and I may end up using pocket screws somewhere to get it done. I incorporated a shelf at the bottom for stepping, foot resting, lowering the CG, and stabilizing the single front leg side-to-side.

I'm sure there will be some round-overs/chamfers used and final shaping with rasps shaves etc.

Ha! like I'm going to get that far... Still eventually I'm pretty sure it'll be burnished oiled & waxed.

I insulated the garage shop this summer, but I didn't get a heat source and it's been pretty cold here lately. That could impede progress. The shop is unused and in disarray while I've been remodeling other spaces. Hopefully the weather cooperates. The shop will be below glue temp, so that could complicate things.