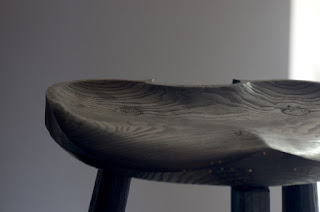 My daughter has played the violin for several years and recently decided to learn to play the cello. After finding a reasonable used instrument (Thanks Greg!), I noticed one of our dining chairs missing from our table, and unsurprisingly found it in her room. Despite the normal backlog of projects, I decided she needed a task specific seat for practice (and my OCD nature needed all the chairs at the table). There are some selfish reasons for this as well, besides that it allows me to procrastinate more on the second phase of the "Epic Kitchen Project" leftovers, it also allows an entry point into chair making.

For the last few years I've hungered to build chairs, but have been largely unable to begin in earnest. While I did make the shop stool in the SSBO a while back. many of the chair designs I want to build have been waiting patiently, generally building in complexity & nuance with each napkin sketch revision. Add to this the inspiration peer pressure from chair makers like Jeff Miller, Chris Schwarz, Peter Galbert, Paul Lemiski, and non-chair makers like Konrad Sauer Throw on top that, positive wworking community peer pressure in the forms of June chair builds and Extravaganzas and you can understand my pent up creative need.

If you also follow me on Instagram you've probably seen my other obsession is scorched & waxed finish (Shou-sugi-ban) especially on red oak. I love this finish (full stop) It has lots of rich texture and a luster like a vintage motorcycle jacket; and since I have a decent pile of red oak (a wood I am otherwise not too fond of) many of my project sketches lean this direction. BUT the scorching process is at times violent and does unpleasant things to glue (your mileage may vary) so I was hesitant to burn (and ruin) a project I had invested significant effort into. I've also been curious as to how this finish would hold up and patina when applied to a chair.

This little stool which I was late to Peter's blog for, (I think I was first introduced to by #toolmakersretreat) would be the perfect test bed for me to try out several important skills from saddling seats and "staked" joinery to the process sequence requirements Shou-sugi-ban would introduce. The instruction and videos on Peter's site are more than enough instruction to build a perch, though it's a disservice to not get his book Chairmaker's Notebook. While Peter's design sense is spot on, functionally it needed some tweaks to work for my application

First off, the legs needed to be shortened as a consequence of its function as a cello chair this meant I needed to tweak the rake & splay a bit to maintain the same ground contact patch and avoid it getting tippy, this required a bit of trig to get in the ballpark, then rounding to a convenient angle. The forward lean and stance is good because of the desired posture for cellists. Second, I wanted to avoid turned legs; I have just a short midi-lathe and I prefer the simple (looking) chunky square legs on welsh stick chairs.

I also decided I wanted to try to play with the shape and see if I could bring in some design queues from the violin family. I introduced the C-bout into the back which doubles as a nice grab handle (and casts an interesting shadow). The concave saddling of the seat adds a bit of an optical illusion mimicking the convex arching of a violin top. Finally the tapered legs with a gentle crowning on their faces hopefully give a subtle nod to the fingerboard of a violin. 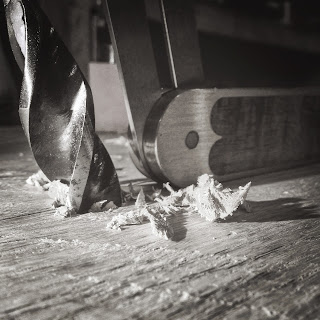 Galbert works with green wood and hand tools. I love hand tools as much as the next galoot, but I was working with dried oak and not all of the necessary tools, so I did much of the work (saddling, leg tapering) with power tools (kutzall, table saw). Surprisingly, the seemingly obvious thing to do with power tools (contouring the seat with a bandsaw), I did with my bow saw after my only blade broke at the weld with a bang. Still it didn't take long at all. I got lots of hand tool use in the project from drilling the leg holes to bevel cleanup with spokeshaves so I don't worry I've switched to CNC just yet. 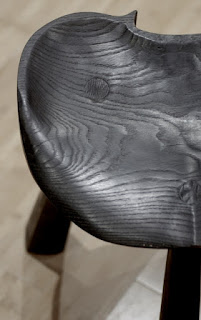 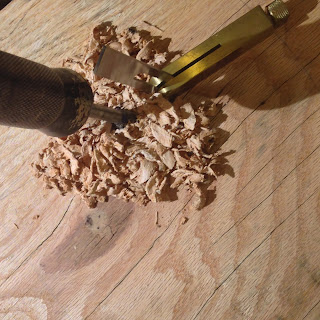 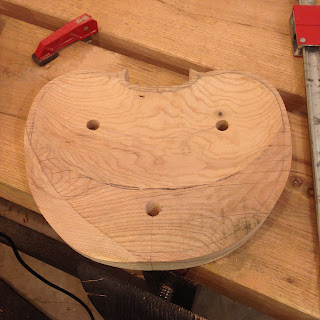 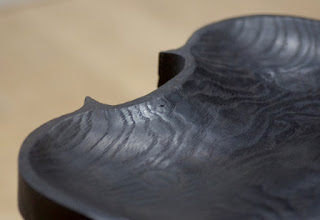 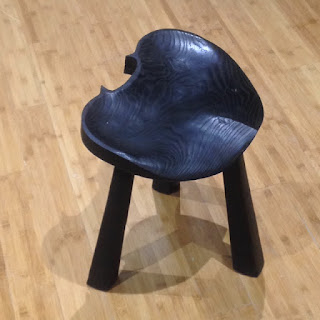 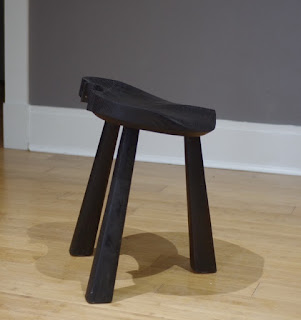