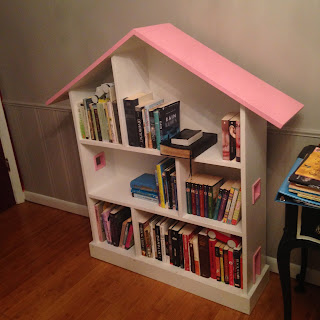 I've been meaning to go back and document some of the things I've made prior to starting this blog. Of course life intervenes and I don't get around to it. But last week my baby girl daughter told me that she was done with something I made a long time ago, and I decided I needed to document it somewhere lest it disappear forever.

I'm pretty sure this was made late 2002 early 2003 as it was made in preparation for the birth of my daughter (might have finished after her birth.) Still as I look at this piece for one last time, I can't help but think of that time when I thought I would never have a complete enough shop.

Pretty much stolen a reproduction from a Crate & Barrel or Pottery Barn catalog of the era. I do recall changing up some of the dimensions to either maximize 1X12 material usage (I probably had a spreadsheet formula) or to better fit books. I think it still looks classic, although only as I've went to move it have I noticed that it being >48" in two directions makes it a pain to fit in most vehicles

The project was made with pretty basic materials:

Looking back at this project takes me back to a time when materials and tools were often limiting factors, but fewer family obligations. Even more than the memories I have from this build, are the countless hours I subsequently spent with my little girl picking books from it's shelves and reading together; watching those books go from board books to Dr. Seuss to Judy Blume and now beyond to thicker books without pictures.

If you know my little girl, you know of her love for books, we've certainly gotten our use from this item and it seems fair to allow her to move on to a Teen style (sigh.) Still, it was with a bit of sadness that I tried to figure out what to do with it. Put it away somewhere? (not a lot of storage space) Put it on craigslist? Bonfire? My daughter suggested we offer it to a cousin who has a toddler daughter. I tentatively sent a text and was overjoyed when I immediately got a positive response, they were just talking about getting one like it. It's in good hands.

More than just the things made, we make memories. Never forget that.