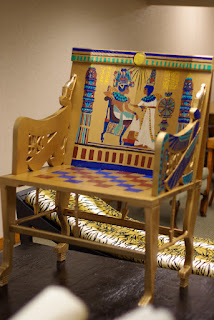 Given the current lack of productivity in my shop, I want to occasionally go back and document some memorable projects that I completed before this blog. This time, I wanted to share about the time I was called on to make some things for a dramatic production. I really enjoyed this project mostly from the shared family experience with a great crew. Also in part because the constraints put upon the building of the various props. Overall, I'd suggest if you ever get a chance to do something like this, jump all-in, it'll make you a more creative and faster maker, and help you get over some of the analysis paralysis many of us hobbyist woodworkers deal with on projects.

A Few Pieces From the Project

There were a number of props that needed to be created for this production but some of the memorable furniture related woodworking ones are here.

These were made with x bracing a long stretcher to double as a carrying handle. Had "staked " furniture been known to me at the time, I would have made them in that style. Through wedged mortise and tenons, made them plenty stout even if they were just 2X material. I thought I had a photo, but I don't appear to have one handy. 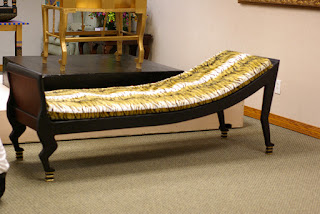 I wanted to emulate some of the animal legs in museum bed examples so I coarsely shaped some legs to give the effect. It didn't have to look good up close, which made things easier, but at times it was hard to keep that in mind, though the lesson is a good one when production time trumps all. 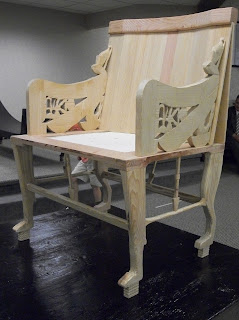 
Though not technically the right period, king tut's throne is well documented and I wanted to give it a shot. Fortunately there was a talented painter available to take the rough bones and make them look presentable. (a few years later when I got to visit the original in the Cairo museum, I was blown away but cherished the details all the more)
The problem in the director's eye was that the traditional Egyptian throne chair was not grand enough to be ostentatious when viewed from the back row. His idea was to have the throne sitting on one or two stacked stones which apparently was historically accurate. The problem was the moving in/out of such a "stone" structure, this meant that I needed to construct a lightweight frame and skin that could still be

moved into place in seconds.