A while back, I realized that I'm not one for in-process blogging, attempting to encapsulate each project into some sort of a story arc; but I just haven't been actually "finishing" much lately. Sure there has been some spoons here and there over the winter etc. but it's hard for those to be more than an Instagram post.

For 2019, I chose "Go!" as a one word motto. This means I am trying many new things, supported by the freedom I have as a single dad with independent teenagers. What this doesn't mean, is that I plan well and wrap-up everything before the next new thing needs attention. This bothers me since I generally consider myself serial finishing one project before starting another. Still, in the spirit of adventure, I'm exploring this new method and soaking up the experiences along the way. I suppose this in itself is the story of my now, that of many irons in the fire concurrently, pausing here, returning to this one, etc. So today, I invite you into my current chaos of in-process and nearly done projects. 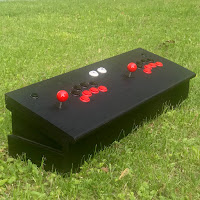 Arcade Cabinet
This project is getting close to completion... I promise. This started out as a typically over ambitious 8th grade art project for the boy.
Estimated time to completion (1 weekend of focused effort) 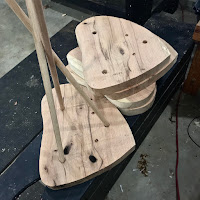 For some time after the Kitchen remodel, I've needed some stools for the island. Since the island is a couple of inches higher than standard, it needs custom stools. Last year I made a prototype that I'm pretty happy with and started down the path of making a set of 5-6. This project appeared to be going along a linear path preparing material for the seats until it came time to drill holes for the legs when I mistakenly drilled the first blank with the legs facing inwards. (I'm not sure it can be salvaged by flipping the top upside down, but may try to salvage) In that moment, I decided to set the tools down and they have sat there waiting for me to return. Last week drilled the seats (hopefully correctly this time) and will hopefully get on to legging these up. Lots more to do here, but really looking forward to getting rolling again especially carving the seats. 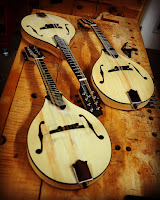 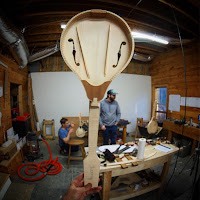 This was quite an experience to say the very least. I took a class from Austin V Papp at Caleb James shop alongside Anne where we built three functional mandolins (in the white) in a week. As Anne says, it takes two solid weeks work to build a mandolin, we just did it in one. (by working 14+hrs a day) in the end I learned so much about instrument making and setting up, which is a real bucket list item for me (I want to make a violin/cello in the not too distant future.)

The hangup with completing this project is 100% finishing. It is currently playable (and  sounds pretty good). All throughout the class, I envisioned it being finished clear, and I was only hung up on the french polishing process. By the end of the week, I felt comfortable with that. But when I arrived home, the musician in the family decided that she definitely wanted a dark sunburst. this meant I need to do some experimenting and finishing work, first on samples and then to take the leap on the finished instrument. But that's where it stands today. 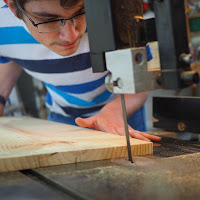 A couple of weeks ago, I had the second annual "non-class" in my shop with some friends, where we built dutch tool chests in a day. This actually went pretty well, and despite a couple last minute cancellations, those that made it went home with a complete (minus paint) tool chest. With guiding them out on new techniques, I got maybe 85% of the way there on a "spare" DTC and had to call it a day. Basically I need to finish the fall front and the lid, which I'd planned on doing with simple hinges.

In the mean time, I took a road trip to Lost Art Press's open house and got to show off a few things including the recently "famous" 4-bar linkage on my existing chest, which now has me re-thinking if I want to recreate that type of lid on this second DTC,(which I've been really happy with) so now it sits, waiting on that decision point. 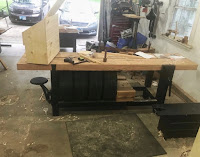 I include this here because this is a project I sort of left undone after I got my split top Roubo usable (notice a pattern?) a couple of years ago. Recently (when I cleaned it off) it started bugging me all the things that need tidied up and finished.

Stick Chair
Ugh this project has been burning a hole in my psyche for years. I made a model nearly 3!?! years ago for this idea I've had brewing for even longer... I finally worked out a tentative solution on the problem I was fixated on (keeping a glued up seat together after the shousugiban process.) and need to just get this out in the world. I have the materials generally at the ready, maybe it's time to start another project...

Estimated time...however long it takes to make a chair? I don't know, a week? a year?

To Be Continued?
Mentally, there is a tug-o-war pulling back-n-forth on what to attack next, yet now as summer approaches, I also know from experience that woodworking time will diminish, still lets hope that come fall, at least some of these items are checked off, and not too many new ones have been added...