The Power of Running Water

Caterpillar (my employer) is no stranger to making significant infrastructure improvements to all areas of the world. One area of significant involvement and investment by Big Yellow is in making sure water reaches those that need it. It's admirable the efforts the company puts forth in this arena, for instance consider this recent press release:

Today, I want to give a "shout out" to Caterpillar, not for providing water to far flung reaches of the earth, but instead someplace much more local. My life is better, right here in Central Illinois from the water Caterpillar provides. See, when the office planners of my small facility were arranging things, they had the foresight to provide a shower area for employees to utilize. This might seem like an extravagance, or an unneeded item by some, especially those that live nearby their work or are attempting to optimize every square foot of a cube farm. Still, I can attest to its worth. In the years I've been in this building, it doesn't get used daily; but it is a key enabler to a healthy lifestyle for employees, much more so than more costly initiatives aimed to do the same, with less efficacy.

Originally, I would use it to go for an occasional early morning jog to try to "get in shape" when I had 2 toddlers keeping me from getting the exercise I needed at home. Later, it would be an asset that enabled me to bike ~20 miles to work occasionally. And this winter past, after returning to this facility, it's been a boon to be able to get marathon training runs in midday. In the middle west, it's dark when you come & leave work for much of the winter. My point is that just as bringing water to a remote village enables unforeseen community benefits, so too adding shower facilities to your work environment has carry on effects. 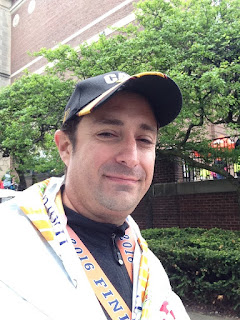 In a couple weeks, I will be running my third annual Illinois Marathon (it begins right outside our office) my 13 yr old son will be running alongside me for the first half (his second); I can trace the start of this healthy aspect of my family's life directly back to a thoughtful office layout. If you are involved in this activity, and your company says it values employee health, providing a place to get clean should be a mandatory feature included in your work. It may not happen on day one, but someone will thank you for it later. Thanks Michael, Walt, Carol and others.
Posted by Jeremy at 9:57 AM