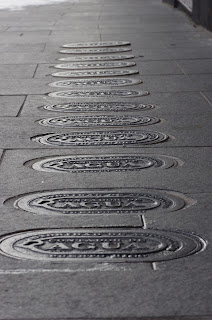 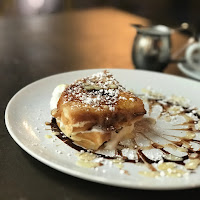 My son and I have a waffle place we go. It's a joint for locals, it's quirky & fun (it's also a tea house with sort of a Moroccan Jazz club feel). It's little out of the way on a backstreet. (It's moved addresses a time or two in the time we've been going there.) The boy is decidedly not a foodie, he always orders sandwiches plain; Panda's orange chicken is a rare foray into "exotic"; still, his favorite thing at this place is the Crème brûlée (inside) waffle, (which this time he had to enjoy via FaceTime... the s'more waffle is a pretty close second.) The only negative of Waffle-era being the preferred breakfast joint, is that it's just a shade over 2000 miles from our front door, in Old San Juan, PR. 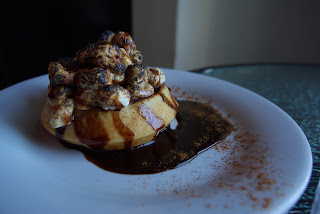 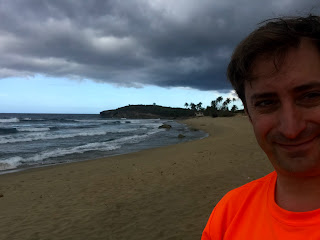 I <3 Puerto Rico. It's beautiful, wild, historic and tropical, but also lively, domestic and tranquil. As any good love story should be, it's complicated and simple all at the same time. I've been there some times (and pondered ways to make that background Coquí soundtrack permanent.) So I was greatly saddened to see the damage and destruction from Maria and especially sad to see the island struggling to get back on it's feet following that disaster. When the opportunity to provide disaster relief work and apply my abilities (such as they are) presented itself, I leapt at the chance to give something back to a place that has given me and my kids so many memories.

It was a great experience on so many levels. Out of respect for the organization I was working with, the people in whose homes I worked, and the many new folks I met, I am not sharing photos here of the work done (though I may over share in person if you get me talking about this) It was a great privilege to be invited to spend time with such a well organized, and caring group and directly assist those in need.  I know there are many people that need help, and while many times we are limited in what we can do...this time I was able to assist folks in need directly, and it felt amazing. It also felt great to work flat out all day alongside other volunteers doing something truly worthwhile, feeling both tired & sore and refreshed & energized simultaneously. If you haven't had such an opportunity, I encourage you to jump in PR or elsewhere. Constructing rooves that can endure all but a cataclysmic hurricane for those that wouldn't otherwise have been able to get their home dry before the next storm was truly rewarding, all the more so after getting to know them and hearing their stories.

It's perhaps understandable that some believe that far off places don't deserve their attention, preferring to focus locally. But I'm surprised how often traveling brings me "home" in unexpected ways. On this trip, I met a new friend that drives past my house at least once a week (now he'll stop and say "Hi"). Still, a more memorable link home was quite literally on the ground in front of me. 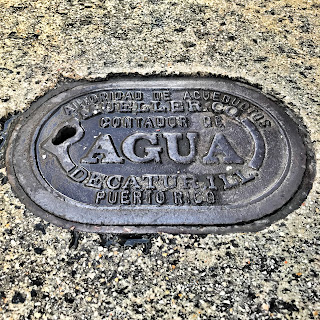 I instantly loved the design of the water valve covers used around the island when I first came in 2012, I think the shape and style combined with their ubiquity on the sidewalks of old San Juan adds to the charm of its blue brick streets. (Also it's a Spanish word I know...) Still, I was surprised when I discovered that many of these cast covers were made by a company in the same small industrial city I've spent much of my working life. I suspect these are 1940's or before and I can imagine the very people involved in this work and how their jobs helped shape their families and the nearby towns I've lived. Humble to be sure, but without such things "where I come from" could be vastly different.

Many times, it feels like the problems this world faces are too big, and "those people" too different, yet if we see these connections, we remember our neighbors aren't just those in earshot, that our work can reach into the corners of the earth, and that just because it's not in our backyard, doesn't mean we shouldn't lend a hand. And regardless, waffles are always a good idea.