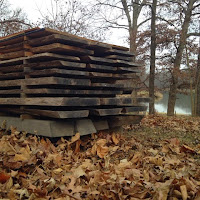 Many of the deepest friendships enjoyed in life stem from commonality plus contrast. It would be tiring explaining the foundation of thought, yet we all need a "you're stupid" kick-in-the-head that we can't get from a clone.

This is the case with Jarrod, one of my closest friends. We grew up together and have many of the same landmarks while at the same time our differences in focus allow us to be that underlying voice of reason we so often need.
As friends will do, we "gently tease" each other on the aspects of their personality we don't share. So after enduring a decade of "your interest in furniture borders on disturbing" comments (it probably does) I assumed he was up to some joke when he started inquiring about getting started in woodworking. 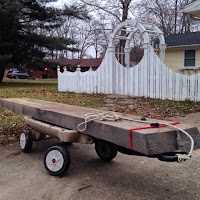 
If anyone has ever said to you "I'm thinking about getting into woodworking, what do you think?" (especially if you are far enough down in the woodworking blogosphere to be reading this), you probably overwhelmed them in short order with very odd sounding things they "need"
Get massive out-of-print volumes, oh they are in french
Consider harvesting your own trees or digging in people's firewood piles!
Buy rusty tools instead of the nice looking ones they sell at big box stores.

Especially true is it when they probably had in mind a set of nailed together bracket shelves. Still, after my exuberant flooding of info, Jarrod actually took my advice and started off not by running out and buying a SCMS, but by reading the Anarchist Tool Chest. and after that, I think I had sold him on the general direction to take. Of course we have different end results (he's got a few specific projects in mind and is starting from ground zero with both skills and tools.)

Still, he was all-in on wanting to build a Roubo bench early and brought up the idea of working on one over the winter break (we are different types of Transpondsters at a corporation that shuts down annually from Dec 24-Jan 2, also ) After seeing Jonas and Brian's woodworking Jam a while back, it got me thinking on dusting off my "probably dry enough by now" oak. I had hoped I had enough 4" thick material to share, I didn't. In the end he decided to push a few tools ahead of the bench and just come help a day on mine during the break.

This meant that I needed to finalize my bench design. Project creep of course sets in after reading pretty much everything C Schwarz has written about benches and thinking on this for years. My end result is that it will be:


Making room for this winter build meant I needed to also complete the shop renovation that I'd been halfheartedly been working. This I got done "enough" and a few weeks prior to the build.

I pulled out (from the bottom of the stack) the rough materials. My hope was to get the timbers S4S prior to the date Jarrod came and I could just dazzle him with my mad joinery skillz. Regrettably this didn't happen (for a few reasons...), but Jarrod did come and helped out a lot (along with my dad and his 20" planer) and we all learned a lot about surfacing large timbers

In the end, both the bench and Jarrod's woodworking journey are off to a good start. Pretty sure we'll stay friends even though we now share another interest, he'll probably cut pins first if i know him... 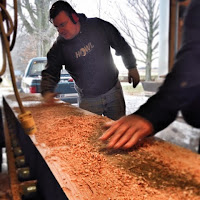 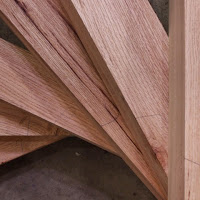 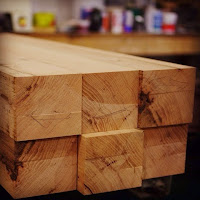