Starting at the Top

I had decided on a rising dovetail joint for my leg-top joint on the Midwestern Oak Roubo Bench Project, basically because I thought it would be a cool, mind bending joint for display on a bench. I knew I would need to attempt the joint prior to doing this with the larger sized timbers.

I've only really ever seen Roy Underhill do this joint and in his Wedge & Edge book he uses this in a workbench. Of course not to detract from his work, but I was troubled with the angled rear tenon as it would be weaker due to grain run-out. Also I knew from experience that so many sliding contact surfaces (7) coming together would mean a pretty tight fit during assembly, so this led me to make a slight modification and turn it into a tapered surface, such that the joint would only come together in the last instant, making assembly a bit easier. Theoretically, this weakens the joint's constraints a bit in the top rotating around the front edge, but mass and the self tightening nature of this joint will render that irrelevant for my application.

I made a small scale mock-up of this joint from scrap oak. This worked out quite well and confirmed my suspicion that conceptualizing and laying out this joint is most of the challenge. So after surfacing the top & legs I plunged into this joint.

One key to laying this out is using a divider to break the leg depth into 4 parts, both the top and bottom of joint. I use a cutting gauge or marking knife to leave marks that I can drop into later if need be. Still, I marked all 4 joints (top and legs) at the same time to keep things straight along the way. Another thing to remember is that the dovetail angle is the same at the top and the bottom faces. The bottom angle "line" is buried and can't be marked, but remembering that you are using some ratio for the top tail allows you to transfer the same ratio to the sides. The front and side face angles are the result of connecting the dots of where these angles intersect the faces.

In making the mock-up, I'd found (after cutting the "tail" first and losing some references) that it was important to cut the mortise first. Given the thickness of these mortises, I attacked them with a 3 lobed auger bit which is now one of my favorites. Since the mortice would be tapered, I cut the angled surface with a bow saw to ease material removal and set the depth of the plane for "zipping" out the waste with a chisel. I learned that I don't really have the appropriate scale tools for this type of work (bisaigue anyone?), but with bench chisels, float and file I was able to get to my layout lines. After that the Tail sockets were done in much the same way, except much easier since there is much more access. depth cuts with a back saw are essential here given the remaining knife-edged bridle of sorts that may split a bit or otherwise get removed, taking away your reference.

Turning to the leg, with layout lines already in place (and waste carefully marked) it's fairly easy to make the 7 straight cuts required. I thought it easier to make the angled face prior to the wedged cutout.

My hope was that these would drop in straight from the saw with a piston fit, but unsurprisingly they did not and require some additional fitting. (So much for those mad joinery skillz) This is a lot more work than I'm used to as test fitting these components requires some weight lifting... The work to this point all occurred around New Year's, not much has proceeded from here, but reasons for that's a story for another day. 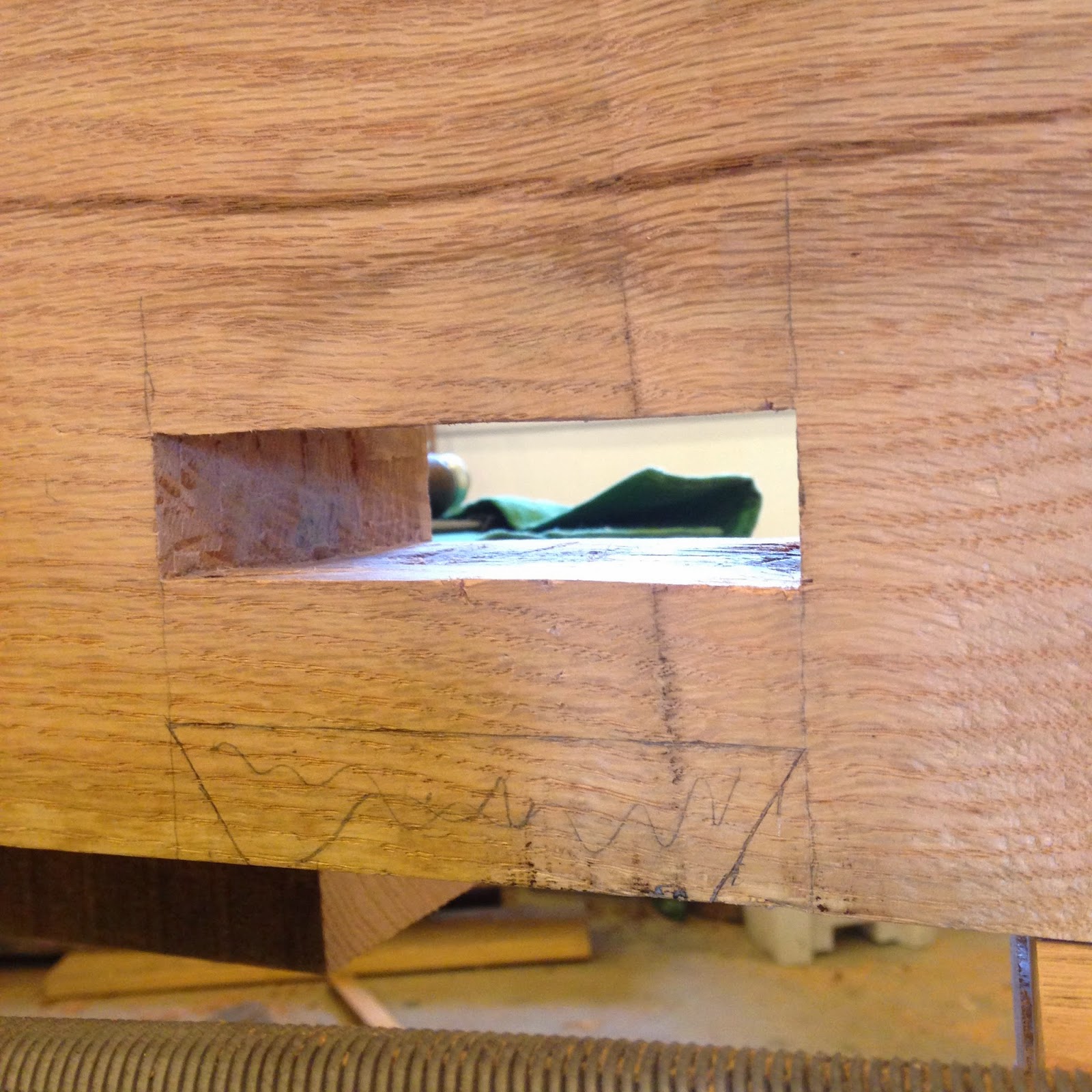 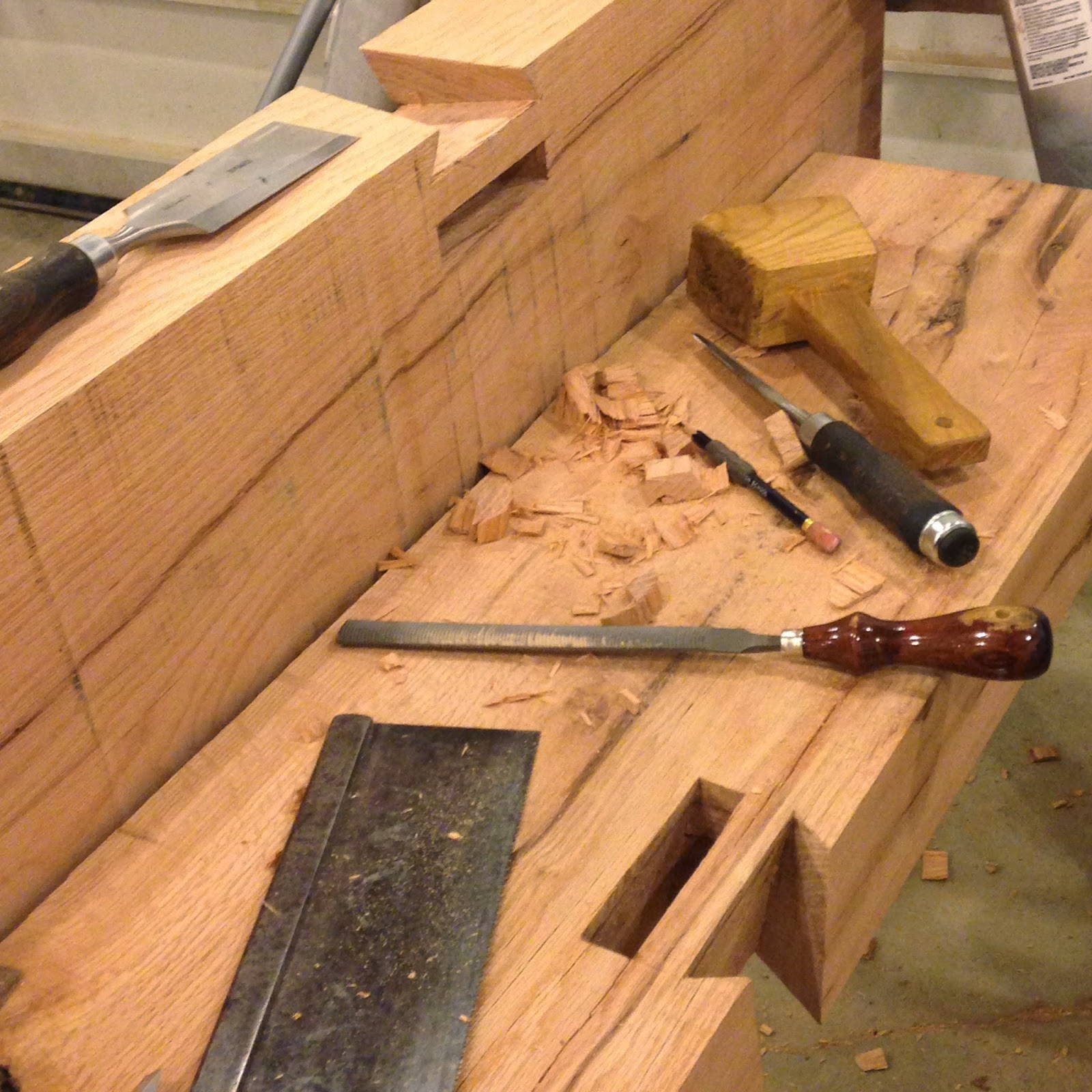