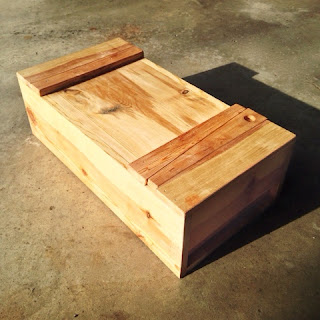 A few weeks ago, I got to assist at another volunteer construction project doing trim carpentry work. I get to hang out with great friends and hopefully can contribute something to the larger project, not fancy work, but time very well spent. As it was a-ways away as these projects tend to be, I was riding with friends. In general, I try to pack light, and frankly I don't have most of the usual tools for this work. Surprisingly, construction tools don't overlap with my woodwork as much as it would seem. The contractors in our group always readily share their SCMS, job-site Table Saw,  6' levels and the like. I usually try to bring the tools that most others won't have, but might be just what is needed for that special case. This time around, four of us would be traveling by Camry, so tool space was going to be at a minimum for sure.
I have traditionally brought a few of the typical odd shaped tool carriers, which waste quite a bit of space considering their appearance. Loading up the needful the night before yielded a footprint I knew would take up more than my fair share of the trunk. If only I'd built that small Dutch chest or Odate style carpenter's box...I decided I'd give it a shot, since it was this or try to squeeze most everything in a Lee Valley tote bag. Because I had all the hardware for the Japanese box (none) I decided I'd try that one. 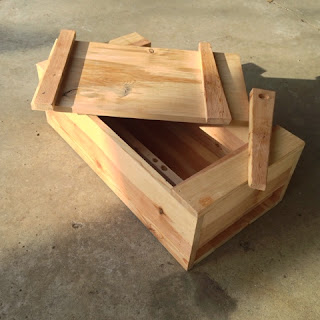 I was limited by what I had on hand, a pair of walnut stained (not painted) ~5-6’ 1x12 pine shelves I'd pulled out of some closet or something. They would have to do, but I didn't like how the heavy stain would look, so I quickly ran it through the lunchbox planer to get it mostly down to bare wood. "Sweet, reclaimed lumber, I'm going green!" I thought, grateful for a descriptor short of "cheap" or "lazy." I settled on a size in short order, tall enough for a #4, as wide as I could get with one board, long enough to have enough wood (2') Then I got to work and "just did it". If you are unfamiliar with the form, I saw it first from Wilbur Pan and then several other variations appeared. While a simple crate, it has great features, it is dust tight (well mostly... at least as good as the Dutch chest) sturdy, even integral handles. Go ahead and check these better examples out:


The only slightly clever things I did, were: 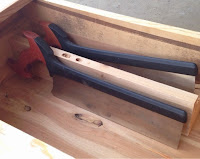 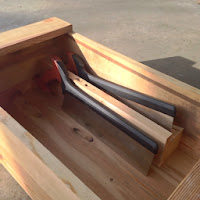 The end result in a short evening's effort was exactly what I needed to get my minimal tools to this construction project, and got me thinking more about using this form as the basis for a tool storage system. While probably not as truly efficient as an English ATC or wall unit, I see this form could be modular like Legos.

My plan would be to use a standard width with 3 lengths (~1', 2', 3') and 2-3 heights, allowing me to create a stack-able unit (Jenga anyone?). There might be some access inefficiency, but it allows my various trade tools to go into their own crate and play well together ala the tanos system (saws, layout, shaping, chisels, bench planes, joinery planes, sharpening, plumbing, electrical, drywall...) It's not often I need to cross trades in the same work session. I'm rather fastidious about putting my tools away at the end of the day. I can see a row or two of these resting easily on the lower stretchers of a bench, giving convenient dust free access to the most used tools (and extra weight for the base) Perhaps some indexed pins or a key groove would allow them to interlock when stacked. I'm sure there are a few design niggles to be worked out, like making sure that the lock can be installed/removed with several stacked side-by-side (feel free to point out anything else as well). Still, given the low investment in time and materials in such a system, and the ability to tidy up the shop appearance, hopefully I'll be making a run of these in the near future.
Posted by Jeremy at 6:21 AM