The Vise of Lethargy 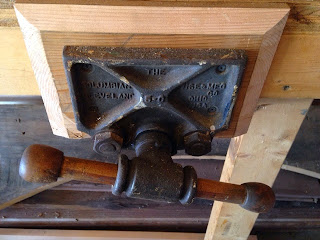 This past winter was especially harsh; it broke  records and spirits along with them.

Like many, I do a majority of wood work in the winter as summer dictates other uses for my time, like BBQ's, yard work, and playing with the kids. In 2013, I'd spent some time adding insulation to my attached garage shop (but no heat yet) This was to allow me even greater time in the shop, and hopefully keep it warm enough that others might want to hang out there with me when it's >50°.

Despite the insulation, the temperatures were extreme enough to force me first to delay scheduled projects following the SSBO and vacation (related to finishing the dreaded bathroom remodel) and eventually to give up and merely lounge lethargically on the couch. I kept busy shoveling snow, There were some benefits to the eternal winter, like that the pond out back stayed frozen long enough to really have fun skating with the kids and enough snow staying on the ground to make a "skeleton" run on the backyard hill during the Olympics. Still, I didn't get much "done" in February, and frankly it seemed the more time I spent away from the shop, the more easily it was to stay away.

In early march, My dad mentioned he'd installed (in his heated shop) one of the vises he'd picked up a couple years earlier at an auction in some sort of crazy buy 2 get 1 free vise pack or something. A couple days later, I was trying to shove something else in the garage (rather than face going out into the frozen tundra) when I realized that what was in the way on the floor was one of the other vises that was included in the bundle. This was a solid, vintage, simple, somewhat rusty, cast iron "Colombian" vise. This reminded me just how long it had sat on the floor waiting for me clean it up and attach some bench to it. Given that it wasn't a quick release style and I already have a screw for the front leg vise and Emmert clone for the tail of the planned Roubo bench build, this vise didn't have much of a purpose, but given the price I had paid (free) it seemed too good to get rid of, that's how it ended up on the floor in my garage for 2 years.


This night, instead of returning to Netflix, I decided to attach it to a current bench (a wall attached plywood topped mash-up that started as an L-bank of shelves from a previous home owner) I mounted it lower than usual to avoid cutting into the 2X4 front apron which would weaken it too much (and be more work.) Cleaning up the rust, mounting, and making a chop from scraps took only a couple of hours max. Those hours got what was a boat anchor off my floor, and my shop back in business. Maybe it wasn't a vice after all.
Posted by Jeremy at 5:09 PM