Come to the Dark Side (They Have Cinnamon Buns) 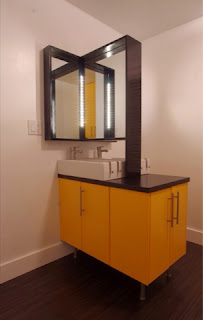 There is definitely an undercurrent of anti-IKEA in the woodworking community "The lady doth protest too much, methinks." It reminds me of all the galoots that NEVER watched Norm, but knew all the details of each episode. Sure a lot of the things at IKEA are "less sturdy" but as a person interested in design growing up in the corn fields far from the big city IKEA stores, I can't help but be intrigued by the intelligent design, and clever functionality of many of their products. Also as many folks have found, if you pick and choose there are often diamonds in the rough, where quality is just fine. I hope we can all agree that good design makes the world a bit better. 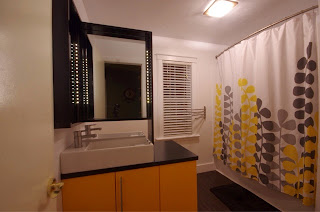 I also appreciate the modern, playful attitude that many IKEA designs display. Most of the time Danish modern doesn't fit in with my preferences in the end, but in the case of our kids/guest bath it seemed that a clean, simple & fun design would be just the right choice.

Also there is IKEA Hackers. Since IKEA products are designed to work together, elements can combine into unexpected items well beyond what is advertised. This type of thinking stimulates the "how else could this be used" synapses. 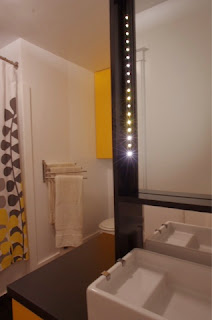 This particular adventure begins when I pulled out the peeling white/avocado green tub (having been refinished already once) and learned that there was water damage. (Yippee, isn't there always.) Which meant new flooring. This got us thinking about re-configuring the entire bathroom, moving the fixtures and demoing a floor-to-ceiling cabinet that blocked the natural light in the room. Also my two kids were spending a fair amount of time "debating" over who was usurping the sink during nightly tooth-brushing rituals, so I wanted to see about squeezing a double sink in this cozy space. (yay more plumbing...) At some point, I came across the idea of back-to-back sinks and thought it'd fit better in the space (and reduce sibling elbow nudges.)

After looking at a way to use IKEA cabinets to make a three finished sided cabinet, that fit the sinks & space, I came away empty handed. Instead I ended up with a bold yellow painted cabinet that I think would be right at home in IKEA, and built from the remains of that original demo'd cabinet with IKEA (Blum) trimmings. The "T" mirror was custom, but is inspired by the Molger Shelf Mirror with the addition of nearly invisible integrated LED task lighting. (This mirror has a neat optical illusion effect of being see-through given the symmetric sink layout.) By pairing another similarly built cabinet over the toilet, we gained overall usable storage space and have made the space feel more open and more functional. 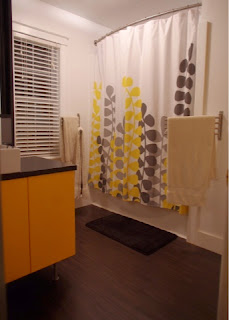 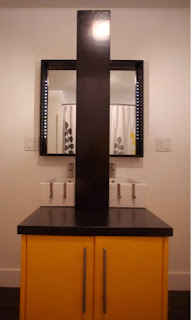