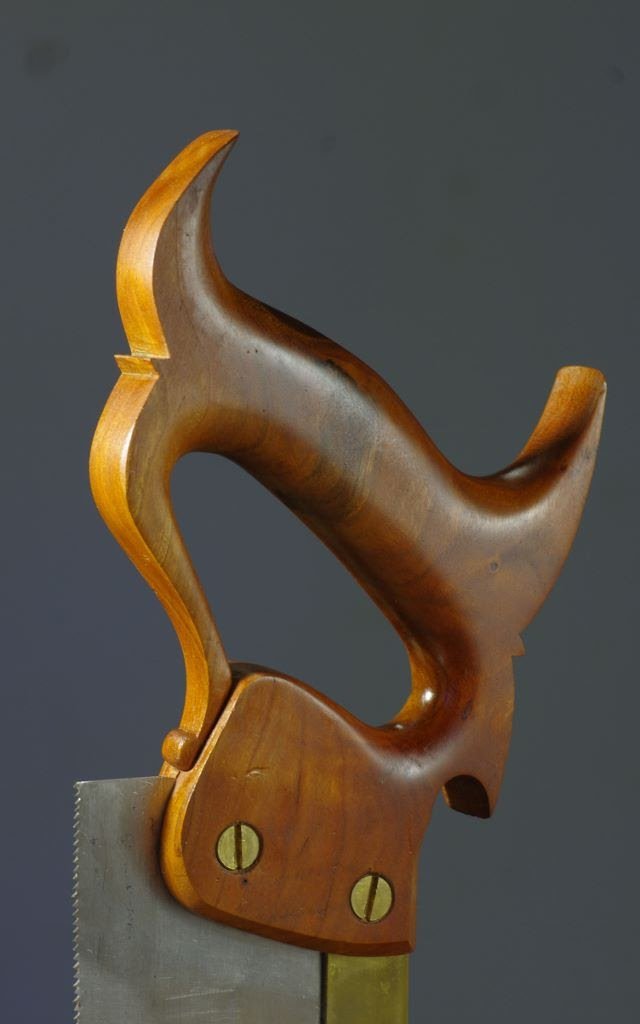 This post started out as a teaser about some other upcoming project posts [1]. Then it turned into why things I do take forever [2], finally it became about the value of wasting time [3].Maybe this is why it takes me forever to write...

Back at a few years, there was a clear resurgence of new high end back saws Wenzloff & Sons, Gramercy, Lund.  I felt left out, unhappy with my $9 Vermont American gent's saw, but unable to justify the purchase of one of these new saws, or find a suitable vintage saw (since I didn't look). I was at the beginnings of my tool journey and I needed soo many power & hand tools, that I couldn't justify such "extravagance", especially with my growing family (Where was ATC when I needed it?). So I did what woodworkers do, I decided I could just make one...[2]

I researched pictures, reviews, catalogs, articles, & websites learning about fleam, rake, pitch, hang....[2] I had an old panel saw Dad literally pulled out of the dump (bit rusty). After the application of a little elbow grease and a cutoff wheel, I had a saw plate.[2] I came upon a treatise of 19th century backsaws (must read)[2], so I had some ideas about how I wanted my tote to look & feel. I spent enough time on the cherry handle, that the

prototype needed to be "production" (despite a knot that I swore would disappear in shaping).[2] BTW, toothing a saw plate from scratch shouldn't be your first experience with a saw file... I got it together and it "worked", but the pointy bits looked like what you'd get from DIY orthodontia. I made do with the saw, and was pleased with many aspects of the saw making experience, though I knew I didn't want to start a new saw filing company. Still, it was enough fun that I found myself hooked on designing and making totes (and other shaped forms) quite a lot.[3] I later re-handled (in walnut) a decent miter saw whose plywood handle previously had the ability to cause blisters while hanging from a nail. When my daughter wanted to cut dovetails in the shop, I re-handled that $9 gent's saw to fit her hand and style better so she would have something all her own (she has since decided she's more of a continental girl and prefers frame saws[1]) I was pretty pleased with myself;  that was, until I left my cave, and saw the light of the outside world for the first time....

Feb '11 I took a class with Roy, and for the first time I was exposed to well maintained tools. (I could write another 10 posts on this experience, but probably won't get around to it. Short answer, "Just do it!") WOW! Well filed saws cut so nice. I drove home and immediately ordered the LV carcass saws. Unique modern look, an incredible value, and proves a saw can take a lesson from a plane. (I wonder if it could go the other way...)[1]

JMAW Toolworks' first saw sits unused in my till. I probably ought to get it sorted out, it'd probably end up a good tool, but I've been busy with other stuff. You could say it was a waste of time (and that I should have knocked out a few more honey-do's). I'd disagree. In the process, I learned that I enjoyed shaping and also how to get certain details. It provided a soothing diversion from whatever big projects I had going then. I learned a lot of useful technical information about saws, as well as historical details that while perhaps trivial, help me to really see and appreciate the art of various saw makers[2]. I think this sort of sums up my work, often enjoying the experience (physical & mental) from projects as much as the end result. I need to make stuff primarily, but the design and process is a close second & third, especially looking back a few years.[3]
Posted by Jeremy at 8:00 PM